History of Plastic Surgery in Malaysia

The idea of formally documenting the history of the development of plastic surgery in Malaysia was mooted by Dr. Lim Lay Hooi at the 1999 AGM (Annual General Meeting) of the Malaysian Association of Plastic Surgeons (as the society was then named). The importance and value of such an endeavour was unanimously acknowledged and endorsed at the same AGM and I was subsequently entrusted with the task of researching the origins of plastic surgery in this country and henceforth chronicling the events that had occurred since then.

I am aware that a little MAPS booklet bearing the registration certificate of the association, the original constitution and a membership directory is already in existence. However, this was printed in 1993 and this handbook attempts to take it several steps further. Apart from an updated membership directory, it contains the current constitution, a chronicle of the association’s activities and office bearers since its formation and a record of the first 30-odd years of the development of plastic surgical services in Malaysia from 1970 onwards.

Documenting history is never an easy task, despite a resource of original materials, society reports, correspondence articles within the voluminous Association files which was willingly unloaded on to me by Dato’ Dr. Subramaniam. In ploughing through all this, every effort has been made to deliver a final version that is balanced, objective and yet concise. I have also drawn details from numerous conversations with the senior members of our association and to them I express appreciation, namely Dr. V. Surendranathan, Dato’ Dr. Subramaniam, Dato’ Dr. Gunasegran, Dr. Isa Haji Omar, Dr. Stee Wong K. S. and R. R. Angamuthu. I am grateful to Dr. S Kandiah for granting me an interview and for donating some of the archive materials. Last but not least, I thank Dr. Lim Lay Hooi for her editorial skills and her numerous helpful suggestions from the beginning to the end of this project.

The late 1950’s and early 1960’s saw the introduction of various surgical disciplines into our young, recently independent country which naturally first occurred in the General Hospital of our capital city of Kuala Lumpur. Well defined surgical disciplines such as Orthopaedics, Ophthalmology and ENT took root fairly rapidly and quickly established their respective departments in that period. The General Surgery Department while firmly established too, began to experience the introduction of various surgical subspecialties in the form of regular visiting surgeons from outside the country, particularly the United States. The then Senior Consultant Surgeon in KL General Hospital, Dr S M A Alhady, as the Chief of Surgery was largely instrumental for these visits. A well respected and experienced surgeon, his foresight and effort created a fertile milieu whereby young impressionable surgical trainees were given invaluable exposures from these regular visits. From 1962 until 1965, visiting surgeons from overseas coming from various subspecialties such as cardiothoracic surgery, vascular surgery, urology, neurosurgery and plastic surgery took turns, each visit comprising of two to three weeks operating sessions during which the surgical registrars and trainees were given the task of looking after these guests. Through these visits, the neurosurgery department was established in 1964.

Dr Bernard L Morgan, a plastic surgeon from Jacksonville, Florida came repeatedly for these visits and with Dr S M A Alhady, these two men recognised the immense potential and the need for the specialty to be developed permanently on a local basis. Dr Morgan went a step further and graciously accepted two local trainees in his residency training programme. This event marked the beginning of progression from total dependence on foreign expertise to an eventual state of self sufficiency for the country. Two local doctors identified for the programme were Dr V Sivaloganathan and Dr S Kandiah.

Dr V Sivaloganathan, then a lecturer in medical faculty of University of Malaya, was sent to the United States in August 1965. Upon completion of his training and qualification in 1969, he returned as the first plastic surgeon of the country. He went back to the university to continue his work under the umbrella of the surgical department and remained so until his resignation in 1973.

Dr S Kandiah came to GHKL as a surgical trainee in 1962 and as a young registrar was greatly involved in those visits by overseas surgeons. On completion of his final surgical fellowship exams, he joined the residency training programme in the United States in March 1966, that is, six months after Dr V Sivaloganathan. After he was board certified, he continued his stay in the United States to research in keloids for a year He returned to Malaysia in the aftermath of the May 13, 1969 riots. His plans to set up plastic surgical services had to a take back seat temporarily in view of the political instability. Grudgingly working as a general surgeon initially in the early 1970s, he voiced his discontent to his previous Chief of Surgery, Dr S M A Alhady (who had then retired) and with the help of the Director General of Health, his first specialist posting in the government service was as a reconstructive surgeon in Sungai Buluh Leprosarium and secondarily as a plastic surgeon in KL General Hospital. While his work was mainly based in Sungai Buluh Hospital, he tried to make inroads in KL General Hospital. His effort was not unhindered as other existing specialties were not encouraging and he had to overcome many obstacles. Such a situation was not uncommon as when a newer specialty like plastic surgery was being developed, there was tendency for other established units to curtail it because of competition for limited resources in terms of finance, staffing and space.

Finally, with the help of the Director of Development, Tan Sri Datuk Dr Haji Majid small, he was given a Hospital Attendant and a garage and officially conducted the first plastic surgery clinic under the roof of the Orthopaedic Department on 1 3 July 1970. Thus, from that day on, he began to devote his whole time entirely to the practice of plastic surgery The weekly operating session allotted for plastic surgery was quickly proven inadequate and he ended up operating almost daily utilising general surgical and orthopaedic operating time. Patients were accommodated in the orthopaedic, surgical and also the radiotherapy wards, where most of the oral cancer patients stayed. The Combined Oral Cancer clinic was regularly attended by plastic surgeon, radiotherapist, dental surgeon and oral pathologist. The Combined Cleft lip and palate clinic was conducted by the team comprising plastic surgeon, dental surgeon and orthodontist. The plethora of deformed leprosy patients in Sungai Buluh Hospital provided an immensely rich pool of reconstructive work which were carried out in the weekly clinic and operating session there. The earliest recorded reconstructive hand surgery in the form of tendon transfers were performed in the leprosarium. Facelifts for the leonine facies were a bonus.

With this framework of activities firmly established, availability of plastic surgical services gained prominence and a bid was made by Dr S Kandiah to set up a department distinctly separate from the Department of Surgery. This he fought very hard for as he firmly believed that was the only way plastic surgical services could be developed in this country. With the expansion and development of KL General Hospital, he was rewarded with a new department in May 1974. Thus, the first and only Plastic and Reconstructive Surgery Department in the country was established. From the Orthopaedic Department, facilities were shifted to the new modern plastic and reconstructive clinic complete with a minor operating theatre. Bed space was provided for in the neurosurgical ward while operating facilities and theatre nursing help continued to be derived from the Orthopaedic Department.

With the department in order, development and expansion of plastic surgery services was greatly accelerated. Dr S Kandiah identified and helped to train the next generation of plastic surgeons, first Dr Lal Kumar, then Dr V Surendranathan and Dr Yusof bin Said. Ancillary staff were also trained, a record system was established and overseas links were maintained during the early years.

Operation Plastic Surgery in the East coast (Operasi pembedahan pelastik pantai timur), a programme that was started in 1974 by Dr S Kandiah was aimed at decreasing the heavy workload in KL General Hospital. While enabling the local general surgeons to perform basic plastic and reconstructive surgical procedures it also avoided the inconvenience and expense for the local community which would have been incurred had they made trips to KLGH. The plastic surgeon with one of the consultant radiotherapists and a consultant stomatologist visited the coastal towns of Kuntan, Kuala Terengganu and Kota Bahru for a period of ten to twelve days, twice a year. Subsequent projects included forays into the northern and southern states with the availability of more plastic surgeons.Dr S Kandiah left the government service in 1978, leaving behind two trained local plastic surgeons, Dr Lal Kumar and Dr V Surendranathan, as well as a recognisable groundwork within the Ministry of Health, setting the stage for further expansion of plastic and reconstructive surgery and services in the country.

In line with the Ministry of Health’s (Rancangan Malaysia) aim of providing coverage of plastic surgical services for the entire nation, earlier plastic surgeons made periodical visits to outlying areas. This was started by Dr S Kandiah in his “Operasi Pembedahan Pelastik” in the mid 1970’s. These trips were maintained by successive heads wherever and whenever possible despite the constraints. It was envisioned that with time, the nation would have produced enough plastic surgeons to be posted in various centres outside Kuala Lumpur. Certain hospitals were identified as key regional centres because of locality, logistics and catchment areas. Hospital Kuala Terengganu to cater for the entire east coast of Peninsular Malaysia, Hospital Sultanah Aminah in Johore Bahru for the southern region, Hospital Kuching for Sarawak and Hospital Queen Elizabeth in Kota Kinabalu for the state of Sabah. These were the initial priority locations. Penang and lpoh were considered secondary at that time in view of their vicinity to Kuala Lumpur.

While the delivery of plastic surgical services “at the point of consumption” and its ensuing advantages to local community sound attractive as a natural progression in the expansion of plastic surgery, the maintenance of continuity at these regional centres proved difficult. This was inevitable with the small pool of available plastic surgeons.

Meanwhile, a secondary but nonetheless important source of plastic surgical services was provided through the universities when individual plastic surgeons returning from overseas practised their specialty under the aegis of the general surgery departments.

Punctuated by resignations, services at various centres, both in the government and university hospitals were halted at some stage and resumed later. Otherwise, coverage was by the regional centre or from Kuala Lumpur when the situation required it. Despite starts and stops, plastic surgical services both in the government and private sectors have steadily expanded in various parts of the country over the years. This is outlined in the pages to follow. 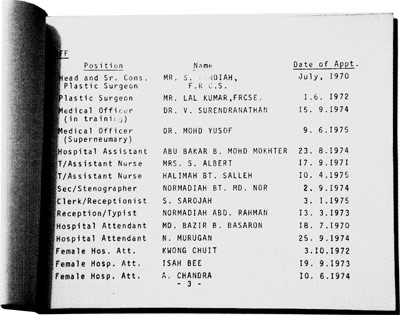 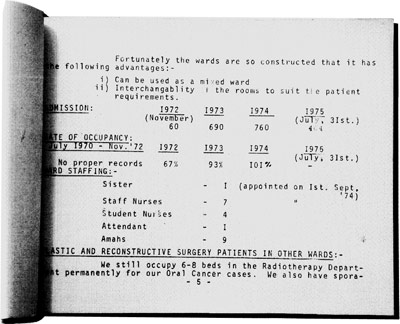 Plan for one plastic surgeon to visit various hospitals for a period of 3 – 5 days. 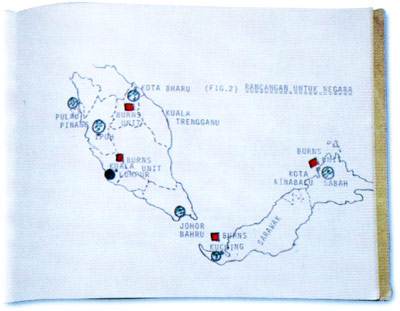 Plan for further centres to be opened in 1975 according to demand & availability of more plastic surgeons. 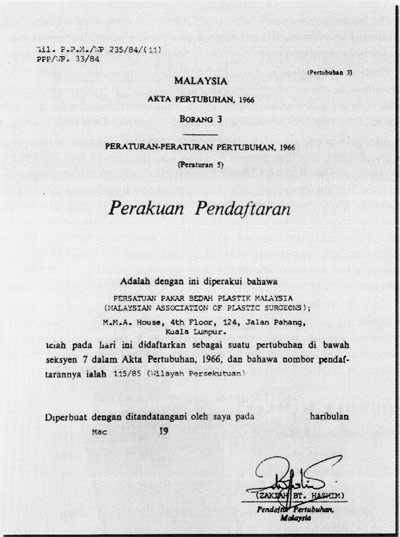